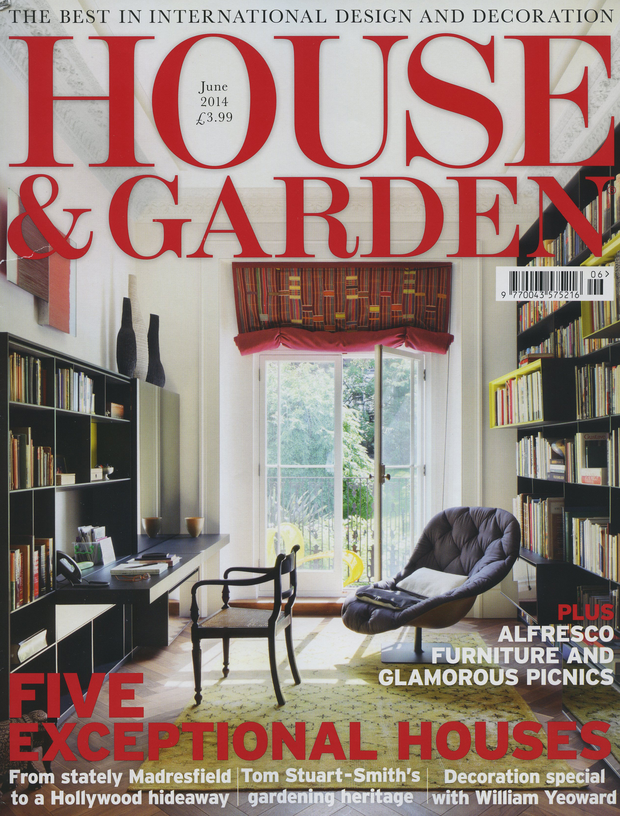 With a glossy front door and quaint cast-iron gate, 185 West 4th Street could have been torn from a children’s book. It looks like industrious elves might live inside, or maybe a family of talking cats. Instead, it’s the home of two, full-grown adults who live there quite comfortably. At just 1,200 square feet, it is the second-smallest house in Manhattan. Peering at it from the street, this is not a surprising fact, but once inside, something magical happens: it grows. The property’s uncanny sense of scale – bitsy façade, expansive interior – is all thanks to its owners and full-time residents, Anne Fairfax and Richard Sammons. The two met at the University of Vir­ginia, where they were both studying architecture, and have spent the last 22 years designing traditional, historically influenced homes. Their range is wide: Federal, Arts and Crafts, Greek Revival, Dutch Colonial, Georgian, Tuscan, Neoclassical – they’ve done it all. Within the 15 blocks between their home and office, they’ve designed seven town houses, including those belonging to Sarah Jessica Parker and Liv Tyler. Anne and Richard had lived just blocks away, and for years they passed the Greenwich Village house they now call home, assuming it lodged switching gear for a telephone company, not people. They never saw anybody coming or going, and didn’t realise it was connected to the taller building next door. In 2000, while Richard was in England, Anne spotted a For Sale sign on the building as she pedalled past on her bike. ‘I knew that it needed a lot of work. It had the right bones, but it had to be completely gutted,’ says Anne. ‘Everything had to be stripped out, including the heating system, the plumbing and the electrics. I reacted in the same way that I approach every other project: I rolled up my sleeves and got to it.’ They redid the house in halves, residing in one as the other underwent construction, and vice versa. There was a lot to discard. The carriage house, built in 1916, and the adjoining building, built in 1970, had been owned and occupied by Armand Hammer, the American industrialist and Soviet operative, whose taste was as eccentric as his politics. His malachite-panelled chimneypiece lit with fluorescent lights had to go, as did a quantity of fake flowers. The place served as Hammer’s pied-à-terre and ad-hoc art-storage facility. Bars on the windows protected a collection of Rembrandts and Fabergé eggs. A round bed – and a houseboy – were kept upstairs. The bathroom and kitchen were swapped; the rear fenestration was consolidated into a single, two-storey window; a gallery was installed to make the most of the high ceilings in the sitting room; and the boiler room was turned into a bar. Anne and Richard both appreciated that, unlike larger town houses, 185 West 4th wasn’t spread out across lots of ungainly levels. Its compactness made it not only cosy, but practical, too, and its scale dictated the decoration of its interior. Anne and Richard both agreed it should be cottage-like, so they installed exposed beams, lined the hearth with Delft tiles, and filled it with small-scale, antique furniture. ‘Contrary to what you might assume, more detail can make a room feel bigger,’ explains Anne. Much of the interior – the chimneypiece in the sitting room being a prime example – was designed according to the golden ratio, an ancient calculation that yields harmonious proportions, which in part explains its pleasantness. Also contributing to the space’s ease is the fact that kitchen appliances are set into the walls. ‘There’s storage everywhere,’ says Richard, as he slides open wall panels to expose drawers and cabi­ents. Other clever ideas include a chandelier on a pulley system – so the candles can be lit easily – and a hidden cupboard in the chimney breast. Antique mirrors and vintage lithographs line the walls, waxed oak floors and mahogany worktops lend a rustic sense of snugness. As with their professional projects, Anne and Richard’s house is free of artificial materials; everything brought in will age and develop a natural patina. ‘We want everything to be of good quality and to last,’ says Richard. It looks like this bijou building will be a treasure for years to come. - Text: Alice Gregory