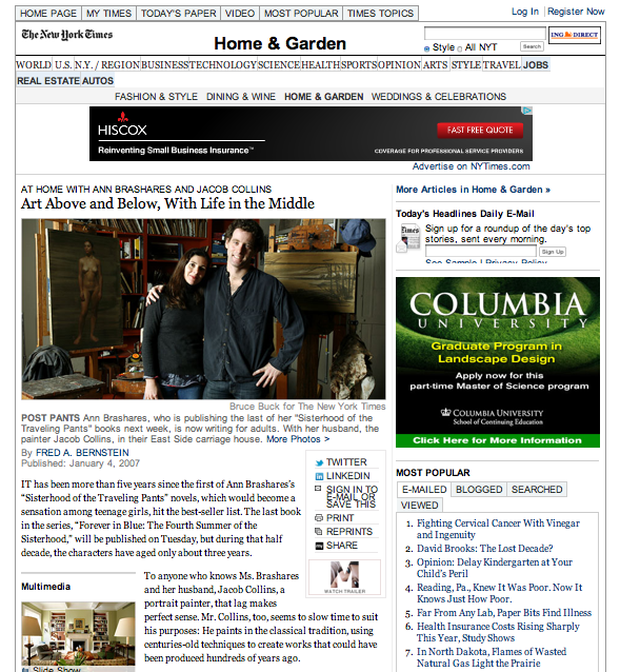 "They hired Fairfax & Sammons, a Manhattan firm known for classical architecture, to renovate the 25-foot-wide, 100-foot-deep building. Richard Sammons, a partner in the firm, began by leaving the ground floor studio pretty much as he found it, with 15-foot ceilings and a black terrazzo floor. (It is so big that the couple can park their car inside without disturbing the students.) On the upper levels, about 4,000 square feet in all, Mr. Sammons created new interiors that look as if they had been there forever, thanks to features like leaded-glass windows.

The architectural details are far less lavish than in many Fairfax & Sammons houses, like a grandiose 60,000-square-foot mansion that the firm is currently completing in Palm Beach. At around $500 a square foot for construction, Mr. Collins said, “our budget was too low” for ostentation. The house’s beauty lies in its proportions. The kitchen is nearly a perfect square, as is the library, with the result that you feel properly situated the moment you walk into either room.

The layout, though, is far from traditional. First, the couple asked Mr. Sammons to dispense with a dining room. Ms. Brashares, who grew up with three brothers and no sisters in a series of houses around Washington, D.C., said, “We always had a big dining room that nobody went into.” Instead, Mr. Sammons turned the back of the house into a 25-by-25-foot kitchen, with multiple work areas for adults and children. In the library at the front of the house, several shelves are filled with candy-colored foreign editions of the “Traveling Pants” books, in more than 30 languages. A stair in the large central hall leads to an upper level with four bedrooms. From there, another stairway ascends to Ms. Brashares’s office, alone on the top floor, her haven."