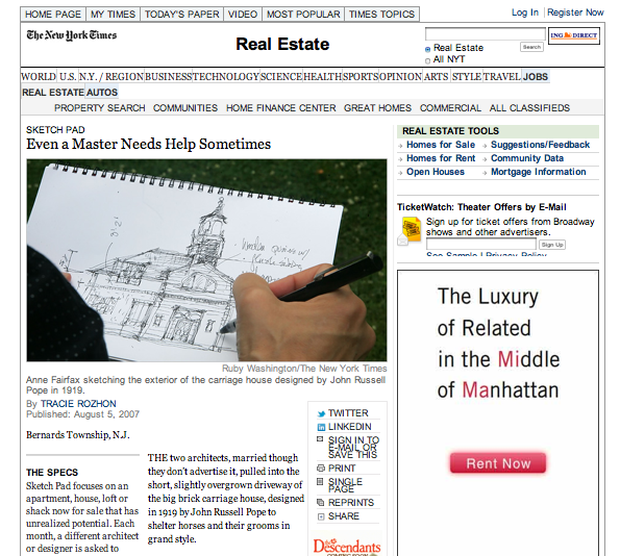 "Another concern, Mr. Sammons said, is that the house appears to be sitting right on the ground.

“They started to do that in the 1920s,” he said. “You see it in ‘The Philadelphia Story,’ when Hepburn just walks in and out.” Here, waist-high shrubbery doesn’t help, making the house seem to sit lower than it actually does.

Mr. Sammons said that Pope was clearly a master at designing in brick: “nice joints, laid in a Flemish bond.” But the original carriage house might — or should — have had a slate roof, he said, not the asphalt shingles it has now. The shutters, too, are missing, with only their iron pintles left exposed. “First, the shutters go back on,” he said, “and then a slate roof.”

The two architects finally went inside, to find one great surprise: a wonderful high-ceilinged gathering/living room, 32 feet by 36 feet, with the huge fireplace that belonged to that awkward chimney. The thought of the buzz of race-time festivities sprang to mind: women in white linen and spectator pumps, men in blue blazers and striped ties, celebrating after a particularly fortuitous win.

The main house was built for Thomas H. Frothingham. a New York City stockbroker who commissioned Pope to design it and its dependencies in 1919. Mr. Frothingham named the 300-acre estate Dogwood and hired Ferrucio Vitale, a landscape architect, to design the grounds."

We did a little Mount Vernon number by using flush boards on the front portico instead of bricks,” Mr. Sammons said.

Leading up to this new entranceway is an appropriately landscaped semicircular stone staircase and terrace, set off by low stone retaining walls on each side.

“The back had been a ho-hum moment,” Ms. Fairfax said. “There was no real entrance to the house, so it became very clear what we had to do.”

Mr. Sammons nodded. “We flipped the site,” he said, “and it isn’t the first time we’ve done that.” The newly created stone steps have their historical allusion: to the Villa Poiana, Palladio’s 16th-century masterwork near Vicenza.

What did you expect from a pair of classicists?"