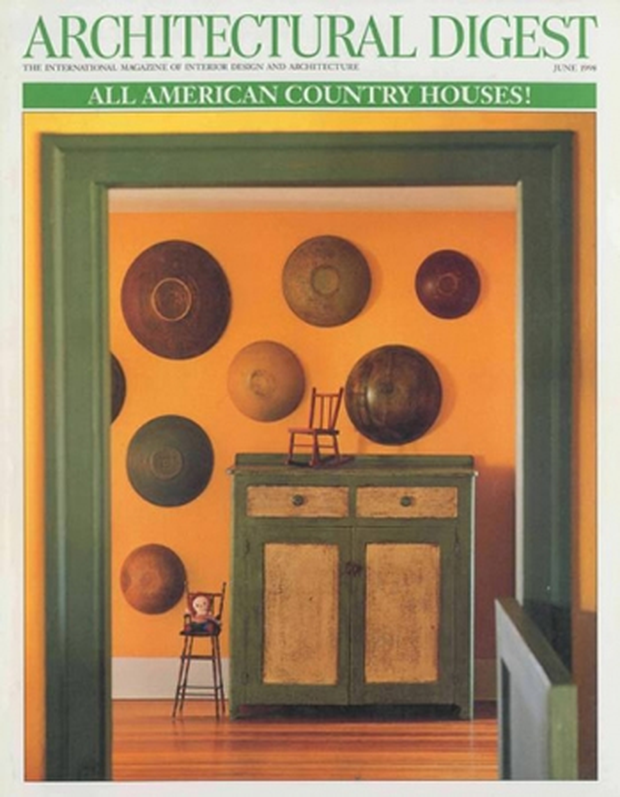 "Built in the 1920s in the Dutch Colonial Revival style, the shingled structure does indeed weigh in on a very human scale, from the size of its rooms to the height of its ceilings and the width of its passageways. And the setting is certainly singular: two and a half acres-garlanded with salty drifts of seaweed-directly on Long Island Sound. Because the house is high to the water, it enjoys commanding views even from the first floor. “I can gaze out to sea for miles-right across to the Hamptons,” the wife marvels. “It’s an endlessly changing ocean. We occasionally get waves kicking right up to the house - in a nor’easter it’s positively Heathcliffish." "Since the couple’s Manhattan apartment is filled with contemporary art, and their Santa Fe place with Native American art and artifacts, their game plan for this house was to assemble American historical furnishings and classic folk art. To that end they repaired straight to Elissa Cullman of the New York design firm of Cullman & Kravis, with its well-known strength in Americana. “I was so impressed with Ellie’s knowledge of the various periods of American design that I asked her to put together a hundred-book bibliography for me so I could train my own eye as a collector,” confides the wife, a published poet and onetime modem dancer who, along with her merchant-banker husband, is also a dedicated philanthropist. “Ellie and I chose everything together -everything that represented fineness and classicism of its type, whether a Weathervane, watercolor, game board or decoy.” Cullman adds, “We always tried to be first in line for all the big antiques shows-New Hampshire, Hartford, New Haven, Wilton, New York, Philadelphia...We worked our way down the eastern seaboard. Our motto was, ‘Never rest until the good is better and the better is best.’ " Reference: Excerpt from _Architectural Digest 1998_ by Steven M. I. Aronson.