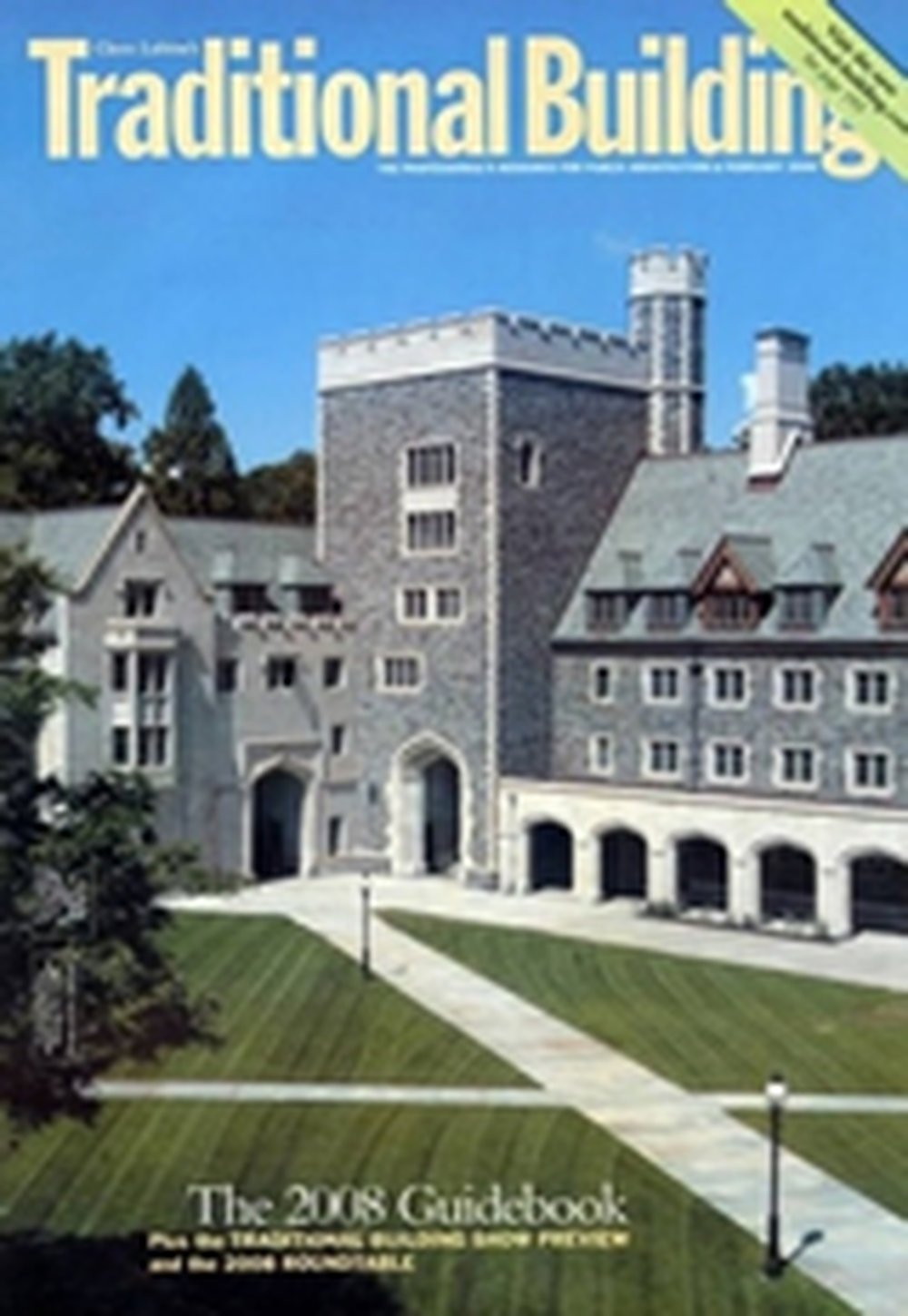 Richard Sammons being an authority on proportion and scale was approached byTraditional Building Magazine to write an article about Princeton's new Whitman College. The project is a beautiful example of Green Architecture as it cost roughly $450 per sqft. The result is an efficient and well appointed project demonstrating good use of Gothic Architecture. Ms Whitman in an advocate of traditional building techniques and was keen to employ these practices in the architectural design. A great debt to Demytri Porphyrios,  architect of the college,  for showing that building with integrity, intelligence and permanence can still be achieved today. Richard Sammons writes, "Princeton's new Whitman College is a triumph and a vindication of traditional building. Last fall, students at Princeton University began occupying the most progressive collection of buildings built by any American university in the last half century. The buildings carry none of the gimmicks of contemporary architecture. They are not in "green style," but are greener than many that are, and, at a construction cost of $450 per square foot, they dash the myth that traditional projects are budget-busters. Defying current conventional logic, the project is testament to the intelligence of its designer and proves that the only progress in architecture is that which is made through the pursuit of the good without qualifications. Five hundred students belong to Whitman College, Princeton's sixth residential college and the first new collection of buildings at the university to be designed in a traditional, not to mention Gothic, style since World War II. Designed by the noted English architect and Princeton alumnus Dr. Demetri Porphyrios, assisted by executive architect Einhorn Yaffee Prescott Architecture & Engineering P.C., Whitman College comprises some 265,000 sq.ft. in eight major buildings containing dormitories and their necessary support spaces: a library, theater, college offices, seminar rooms, dining halls, a small auditorium and facilities for recreation and entertainment.The construction is of self-supporting field- and cut-stone walls with a concrete superstructure, slate roofing and leaded casement windows, and is in the late-Gothic style favored by Princeton's most influential architect, Ralph Adams Cram.

Ironically to some, its patron and namesake, Margaret Whitman, who donated an initial $30 million to the project, is from the high-tech world, being the president and CEO of eBay. Ms. Whitman is very pleased with the buildings and, contrary to what William Mitchell, former dean of the School of Architecture and Planning at Massachusetts Institute of Technology, called "silly" and "stultifying," she says that Dr. Porphyrios designed exactly what she expected.

Whitman College represents a potential sea change in institutional architecture. That it has been built at all, let alone to such a high standard, may be its most important aspect. Over the last several decades, universities and colleges across the United States have been systematically committing suicide by destroying their built environments. Whether they are employing star architects to build signature projects or employing campus-architecture specialists, the general trend is toward discord and devolution of a collective vision. Ivy League schools, particularly those with architecture programs, have been more self-destructive than most and have been cluttered with examples of the "current thinking" from that week's fashionable architect. Whitman College will stand as an exemplar for the future and as indictment of the recent past.

The Urban Intent
At the beginning of the 20th century, bankrolled by the industrial wealth of the previous century, a great number of schools set about "re-imaging" themselves with a consistent architectural theme. "Group Planning," with buildings sharing the same architectural style and massing forming positive urbanistic relationships, was the direction forward. Any new building would contribute to the greater vision and thus the total would add up to more than the sum of its parts. The sense of a college community was fostered by this architectural cohesiveness that made clear what was intramural versus extramural.

The plans at Yale and Princeton were among the most ambitious. They both chose the Gothic of Oxford and Cambridge, though Yale's urban context and Princeton's more open site led to different planning directions. Whereas Yale could lift the enclosed quadrangles of urban Oxbridge colleges and plug them into New Haven's urban grid, Princeton quadrangles, as Dr. Porphyrios points out, are left open on one or two sides. These open quadrangles give Princeton Gothic a very different character than that of Oxbridge and give it a more "American" feel. Though they do not enclose their own courtyards; they open to each other with the solid side forming an implied college wall around the total group. These courtyards are interlinked with pathways and reciprocal views in a picturesque manner.

Dr. Porphyrios' plan of Whitman College respects this existing arrangement. The plan has three courtyards opening towards the middle of the campus. The closed side continues the implied wall of the 1920s Gothic to the west, again reinforcing intramural versus extramural. The buildings forming these courts are deliberately expressed as separate units, avoiding the sense of a mega-structure. The massing was conceived of perspectively, as a cityscape would be. The natural grade slopes to the south but a pre-existing cut in the grade (to provide a level area for tennis courts) was retained to serve as a "moat" against the outside wall. The entry points through this wall are celebrated by a tower and a porter's lodge, the former reached by a ramp parallel to the wall along the moat, and the latter reached perpendicularly with a bridge spanning the moat. That bridge leads to the train station, which services a spur line affectionately called the "Dinky." Travelling by train, this would be the first entry to the campus a visitor would encounter.

These two entries lead into the south courtyard, which is the central and most enclosed of the three, and where the primary public program of the college is housed, including the library (an IT collection with few books) and the Community Hall. The north edge of this court has an arcade providing covered passage to the Great Hall. As this would be warmed by the low winter sun, stone benches are provided. The north courtyard is 14 ft. higher in grade and is residential in character, mediating between the domestic scale of much of Princeton's existing Gothic quadrangles and Whitman's decidedly larger buildings. The change in grade is negotiated by stairs under a second tower along the Community Hall.

The Community Hall itself straddles the grade change between the South and East courts. One enters at the upper level, providing a vantage point to survey the lofty room and timber ceiling. An appropriately monumental fireplace sits at the midpoint of the opposite wall. Two private dining halls, one in the form of an octagonal tower of a chapter house, are situated beyond the chimney stack.

At some point, the administration attempted to make this hall more "friendly," thinking the students would find the room intimidating. The students themselves protested, saying they were perfectly at ease with the concept – being the generation weaned on Harry Potter novels. Unfortunately, the communal tables and dais of Oxbridge dining halls, originally designed by Porphyrios, were not adopted, making what could be the most enjoyable and civilizing aspects of college life a mundane food-court experience.

The majority of the building program is comprised of residence halls, with student rooms located off central, double-loaded corridors. The rooms are pleasant and well lit and some have oriel bays. The popularity of these rooms has led the university to increase the sizes of rooms in another "modern style" dormitory under construction in order to compete with Whitman.

The Use of the Gothic
The Collegiate Gothic style in the U.S. started in 1824 with the founding of Kenyon College in Gambier, OH. The local Bishop, Philander Chase, secured the backing of two English lords seeking to rekindle the transatlantic brotherhood of Anglicans after the revolution of 1812. The college's first building, "Old Kenyon," intentionally evoked a connection to the Gothic of Oxford with which its backers were associated – and the books in its library were donated by various Oxford colleges.

This re-connection with the ecclesiastical Oxbridge tradition would have been an anathema to the likes of Thomas Jefferson, but was wholly embraced by the end of the 19th century, with colleges across the country happily abandoning the architecture of the Enlightenment and donning monastic robes instead.

Many have commented that the adoption of the Oxbridge Gothic style can also be seen, in light of increased immigration from Eastern and Southern Europe, as a buttressing of Anglo-Saxon identity at these elite institutions. But whatever the subtext, the idiom produced a lot of great architecture and the intent was that of fostering intellectual freedom. Even today, the donor, Ms. Whitman, was quoted in the New York Times: "Collegiate Gothic set an ambiance for learning that had a very positive impact on me." Elizabeth Plater-Zyberk, a trustee, added that the style reminds the student that they are a "part of a long tradition of intellectual life."

Though the trustees of Princeton have not been known as supporters of traditional architecture (indeed a new library by Frank Gehry, though much delayed, is being built concurrently with Whitman), a new Gothic college at Whitman, given its context and the tradition of the university, was seen to be a most positive addition. There was a concern that the Gothic core, and in essence the identity of Princeton, was being smothered by the proliferation of modern buildings. The trustees decided that it was time to reinforce this core identity and wanted the new college to speak the same language as that of Cram."