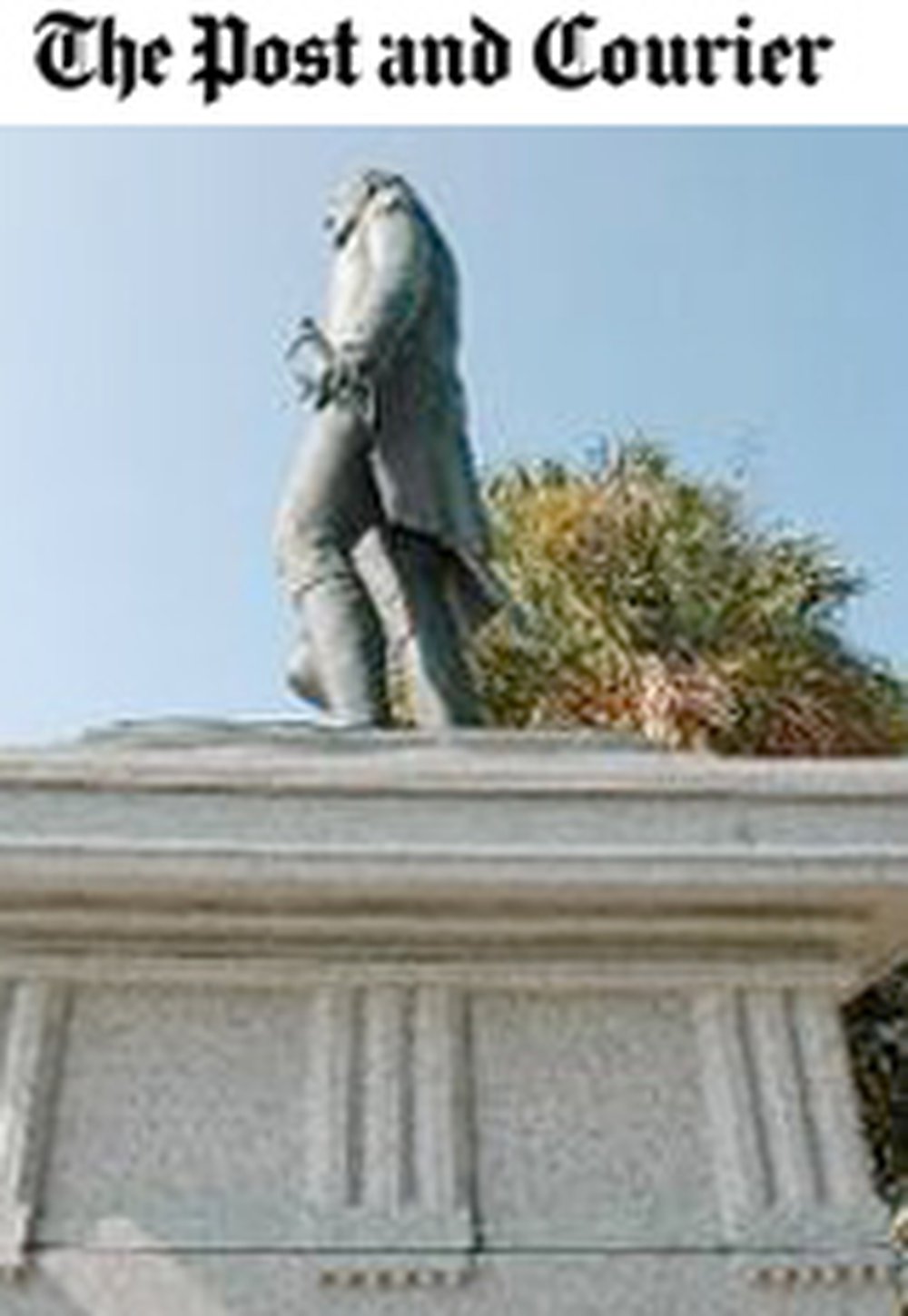 Christopher Liberatos, former head of the Fairfax & Sammons Charleston office, designed the new base for the Moultrie statue in White Point Garden at the Battery in Charleston. It was a pro bono project for Christopher and it caused an unintended rallying point in The Charleston Post & Courier when the contractor installed the trigyphs upside down. Classicists everywhere stood behind Christopher who has asked that this be rectified. John Liberatos the brother of Christopher is also a staunch supporter of Traditional Architecture... This article is written by Robert Behre who has been vocal about the many causes Fairfax & Sammons has supported in Charleston along with Robert Russell and Jack Simmons, President of The Committee to Save The City. When we participated in A Vision For Marion Square there were articles written with great care and detail. One in particular is the article shown in The Post & Courier Thanksgiving weekend, see here.

"To many people, the stone base of the Maj. Gen. William Moultrie statue at White Point Garden looks fine a handsome support for the bronze likeness of the Revolutionary War hero. But to the city's architecturally literate, it has a glyph glitch that should not stand, lest the city's reputation as a keeper of the classical flame get snuffed out. Essentially, the 14-foot stone base's triglyphs — a relatively common classical ornamentation involving three bars — is upside down."

"The triglyphs on the stone base of the Moultrie statue in White Point Garden are upside down, and some say it should be corrected. To John Liberatos of the Committee to Save the City, the mistake needs to be addressed. "It is rather embarrassing for the city, I would say. People who do study architecture would pick it up right away," he says. Liberatos, whose business is real estate, noticed something didn't look right when the base was installed last year, but he needed to consult his brother, Christopher Liberatos, to find out exactly what. Christopher, who then lived in New York, designed the pedestal. He now also works in downtown Charleston, having opened a branch here for the traditional architecture firm Fairfax & Sammons. "I immediately recognized the triglyphs were upside down," he says, adding that he wrote to the statue committee pointing out the flaw.

Triglyphs can be found on many Charleston landmarks, including St. Michael's Episcopal Church, Market Hall and the South Carolina Society Hall. In most cases, they are shaped like an elongated "E" that has its three prongs pointed down, though some look like three parallel bars with the bar across the bottom as visible as the one across the top. It's not a random decorative element, though few people probably understand where it came from. Yale Art History professor George Hersey postulated that its origins — like those of many classical details — date back to altars or tables spread with animal sacrifices. In his book "The Lost Meaning of Classical Architecture: Speculations on Ornament from Vitruvius to Venturi," Hersey noted, "Homer habitually refers to sacrifices as the offering of thighs and so let us note that the three uprights in a triglyph are called by this name. The same is true in Latin: femores. Since 'glyph' means something carved or chopped off, a tri-glyph is or can be a thighbone chopped into three." Another feature known as Guttae — which resemble small beads under the triglyphs — can be seen as "drops draining from the thighbones," Hersey wrote. Many architects even might not know of this story, but as Hersey noted, "the essential device of three upright bones wrapped top and bottom with strands of dripping fat is clearly readable."

It's unclear exactly how much trouble it will be to correct Moultrie's base. Matt Compton of the city's Parks Department, which now owns the monument, says the city is aware of the flaw and is awaiting more information from the volunteer group that created the monument. Compton says he hopes there's a relatively easy way to remove the bronze statue of Moultrie, then remove a few of the pedestal's granite chunks and flip over the one with the triglyphs, the main decorative feature on the base. John Liberatos is one of a growing number who want to see it fixed. "One hundred and fifty years ago, it never would have been done incorrectly. It would have been common knowledge," he says. "It's a matter of pride. We should be doing things the correct way."