2010 CNU Award Winner for an Urban Design in Andorra

A Plaça in the Pyrenees, Best for Small Town Modernization - Sant Julià de Lòria, Andorra in the Pyrenees. The Minister of Culture of Andorra had been watching the steady erosion of the urban fabric of this fragile mountain country, brought about by the economic successes of the late 20th and early 21st century. Andorra was ill-equipped to effectively manage the rampant growth of the small villages, and therefore the original character of the architecture and the small pedestrian friendly transportation routes have been damaged. Their new buildings are of a very low grade, heedless of indigenous materials and hastily erected. Our firm was brought in by the Minister to introduce a new university and redesign a village square, St Julià de Lòria, and to write a code for the newly designated Areas of Protection.

Our goal was to demonstrate that progress can provide a bridge to the future while retaining the best aspects of the past, making regulatory constraints work toward the better good. The government had recently decreed that there be physical boundary areas which would be protected, based on the heritage sites designated by the Minister of Culture and his Cabinet. By drawing a line around these previously unprotected sites, the Minister was able to halt unregulated new buildings and to capture land for new civic uses, like the new University building in this case. As these Areas of Protection were so recent, our firm was able to write a new code outlining the aesthetic intent of the new buildings, the preservation of the old and the rehabilitation of those in need of restoration. In addition, we were given free reign to write into the new codes principles of responsible urbanism, planting seeds for future development that will renew and restore cultural pride in the Andorran built environment.

While in Andorra, we made a concerted effort to visit all of the preserved historic sites and to take note of the materials, to observe how they were used and to get a general sense of how the population had built and lived in their habitat before the introduction of 20th century influences. We found that these remnants were quickly being demolished and swept aside and that there was a need, if only to preserve the cultural memory, to pay homage to the trends of the past. Ancient building practices are not without their lessons for the future. So building with inert, robust materials, especially when building in a hostile alpine climate, guided our principles. We observed that building in a narrow mountain pass that creates its own shadow path can be challenging. It, therefore, made sense to create buildings that were not tall and, thus, not casting significant shadows of 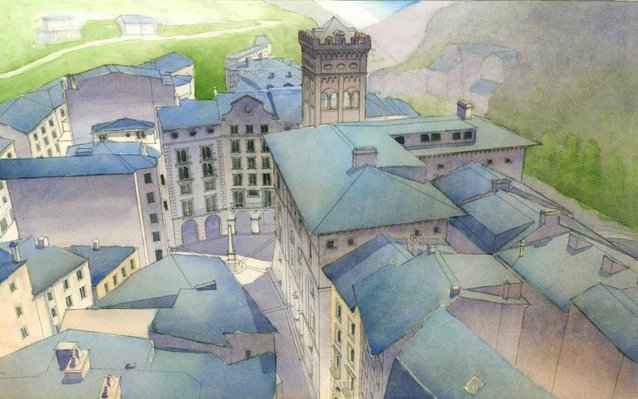 A New Urban Design for Andorra