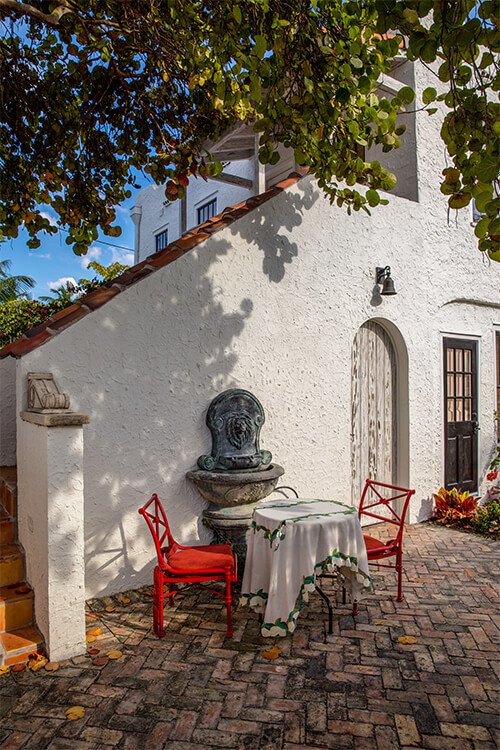 This 1920’s Mediterranean Revival building was in deplorable condition. The wood sills were sitting on sand, major interior beams were rotted, and dry rot was everywhere. However, where the rot had not taken hold, the old-growth Dade county pine structure was in good condition. We gutted the plaster and got back to the studs and repaired and patched in where we needed. All of the original windows were rotted so we replaced them with old salvaged windows which had to be retrofitted into the existing openings. We reroofed and installed solar panels which are completely hidden behind the existing parapet wall. We installed central air conditioning, electrical service, and plumbing. All new kitchens and bathrooms. The upstairs apartments are both reached by their own private stairs. Each stair was completely rotted, and a new cmu stair, integral courtyard wall, and a balcony were built on the north side and a new wooden stair and balcony on the south side.

The interiors were furnished with interesting thrift shop treasures and reclaimed salvage from the neighborhood shops, keeping in mind to support the local economy where possible. Each apartment has its own character and associated color scheme but the emphasis is on comfort and ease, and the apartments were styled as a “furnished” rather than a “decorated” approach. The idea is that this is a home away from home, not a hotel.

The landscape design concept is built around the concept of a walled courtyard, often referred to by guests as a ‘compound”. With the exception of a few signature trees, such as the sea grape and a royal Poinciana, the rest of the site was originally completely covered in concrete. After the removal of the concrete, the new planting scheme centered around the notion of edible tropical planting with papayas, pineapples, dragon fruit, bananas, and star fruit worked into a densely planted tropical garden. Chicago brick terraces with coquina borders and paving squares make their way through the jasmine minima ground cover. An overall red theme is picked up by poinsettia, Ixora, croton, and pepper plants as well as the Chippendale railings on the new pergola on the main house which shares the Lodge property.

The success of the project is measured by its users and based on the feedback of the guests who have stayed there, we have achieved an oasis of comfort from which guests can explore the wonderful small town of Lake Worth by foot or bicycle. Just opened in December of 2015, we already have reservations for the next winter season so we must be doing something right!