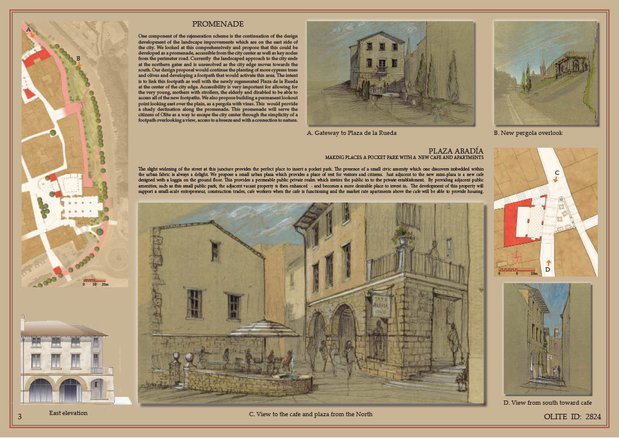 This competition entry began with the concept of building on the strengths of this compact medieval city. Already dense and walkable with intact neighborhoods comprised of historic architecture, Olite is a major destination for tourists who come for the many festivals and to visit the Palacio Real. We proposed to build on the good work which has come before and extended redevelopment toward the southern and eastern portions of the city to provide more options to stroll, live, shop, and to be entertained. This was intended for enjoyment by both visitors and inhabitants of Olite, in

order to keep the viability of an authentic town and not just a tourist destination. We believe that our proposal deepened the visitor experience without sacrificing the needs of the people who make Olite their home.

The town of Olite has over 200,000 visitors a year. It struggles to provide affordable housing and amenities to keep young families from moving out to the very visible suburban sprawl which surrounds this medieval town. Our design process, given the parameters of the three sites, outlined in the brief, was to provide a new gateway to the city on the south end, incorporated into the old monastery. This has a commanding view of the surroundings and is linked by pedestrian footpaths to the rest of the city. A second site was developed to provide new mixed-use buildings and an opportunity to have a new informal plaza to show outdoor movies on the walls of the Palacio Real. The third vacant site was developed as a small cafe, with residential above, and a pocket park to replace an area that was used as parking.

The team was presented with an award in an awards ceremony in Madrid in June 2019. The mayor of Olite expressed his enthusiasm for the project and indicated that he would be proposing to implement several of the design elements that our project proposed.