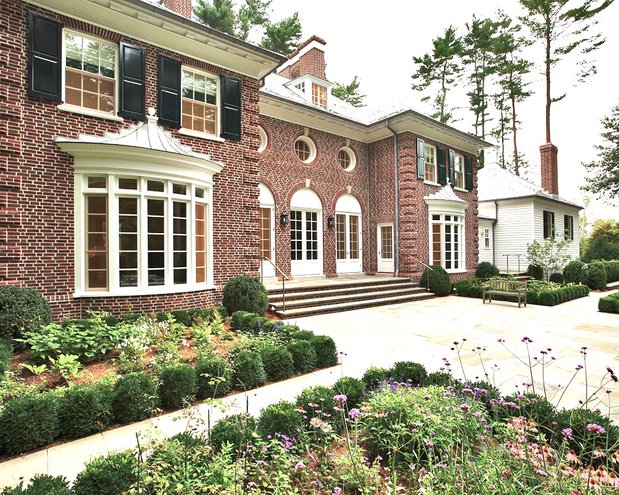 The clients are an aesthetically sensitive couple, interested in local history and architecture, who wanted to replace their 1980’s wood-frame, contractor colonial with something more substantial. As they are collectors of Dutch paintings and Asian art, it seemed appropriate to design a house in the William and Mary Style.

This architectural style from the reigns of King William III (reigned 1689–1702) and Queen Mary II (reigned 1688–94) in Great Britain combined domestic influences from William's own country, The Netherlands, with grander Baroque themes from France. It also included an exotic thread in that, due to an increase in trade with the Far East, it had a taste for oriental motifs from China which led to the beginnings of Chinoiserie.

The house is based on the elegant Mompesson House, built-in 1701 in Salisbury Close, England. It is a five-bay, 6-room Palladian plan (rather than a more conventional Center-Hall, Colonial Plan) with an additional wing. Typical of the William and Mary style, it is made of red brick with white window trim and cornice, and an entrance emphasized by a carved limestone portico. The load-bearing brickwork is in a Flemish bond pattern with brick quoins at the corners. The cornice is deeply coved and has modillions.

The additional wing is a wood frame structure and is meant to recall the owners’ previous house. Its Family Room is designed with historical reference to early Connecticut architecture which typically has one paneled wall containing the fireplace. A wide-plank pine floor, painted an oxblood color, compliments the room’s vernacular style.

This residence was completed in early 2010, and has an approximate total cost of 4.5 million dollars and is approximately 4800 sq. ft. It was carefully designed to be sophisticated, vigorous, yet modest, in an artistic manner. The terrace at the rear of the house overlooks a beautiful pond, which has become the owner's own private Walden.